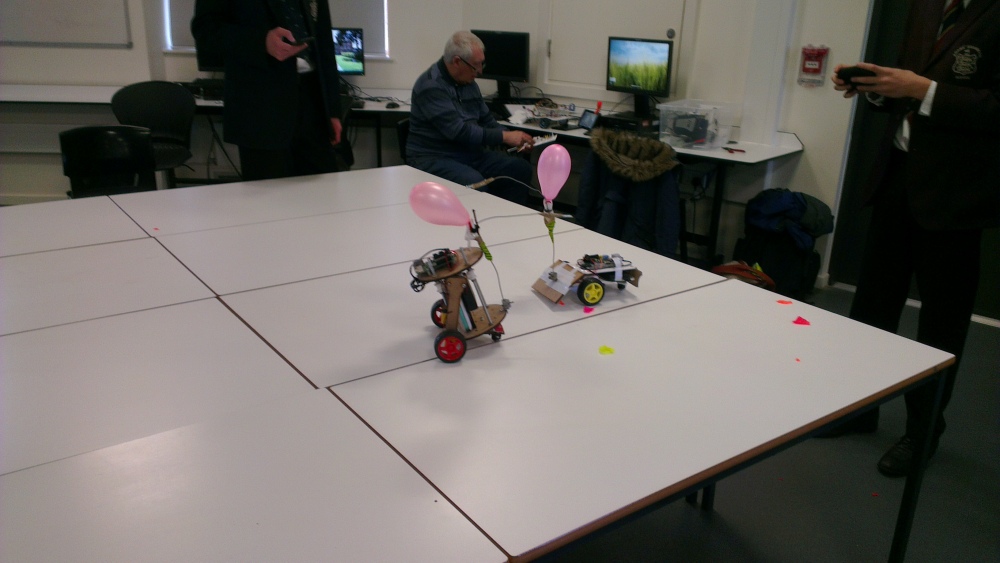 This week we had a Haberdashers Federation day of Pi-Wars themed challenges.  The venue was at Abraham Darby Academy in Telford. We had 7 teams (14 pupils) come over from Adams’ Grammar to battle it out. In total we had 10 teams Pi-noon’ing or obstacle racing to build points, and try out the robot designs.  In addition to this chance to try out robots that have been constructed over the past 3 months; we used it as an opportunity to pick the team(s) that will go to Pi-Wars on April 1st.

The most fun was had when we set up a Battle Royale challenge for Pi-noon. Four robots battled it out until only one (balloon) remained.

We had two big challenges set up to test (remote controlled) driving skills: Pi-noon, plus an obstacle race.

Together with points awarded for each race or battle won, extra points were awarded for: silly skins/coats/covers/faces, new chassis design, modified CAMJAM code, or other technical innovations.

We had some good efforts made in all of these additional categories, but, by far the best effort came from team Trak’d who had installed a lightweight (flask) server on their Pi 3, constructed a R2D2 style bot chassis. They even used a  smart phone app to drive the motors. It is an excellent design, and shows much promise for future mods.  The tight turning circle and ease of control ensured it slayed all challengers on the ongoing Pi-noon battles. They won a massive nine pi-noon challenges!

As a result of the day’s shenanigans we had the tricky job of picking the team to go to Pi-Wars. Clear winners (from all challenges set this term) from Adams Grammar were Team Hackathon. Because the results were too close to call,  I’ve decided to pick a dream team from all club attendees at Abraham Darby Academy – to make up our combined Dasher Team (new name). So we’ll have approx’ 8 pupils representing both schools (The Haberdasher s Federation) off to Cambridge on April 1st!